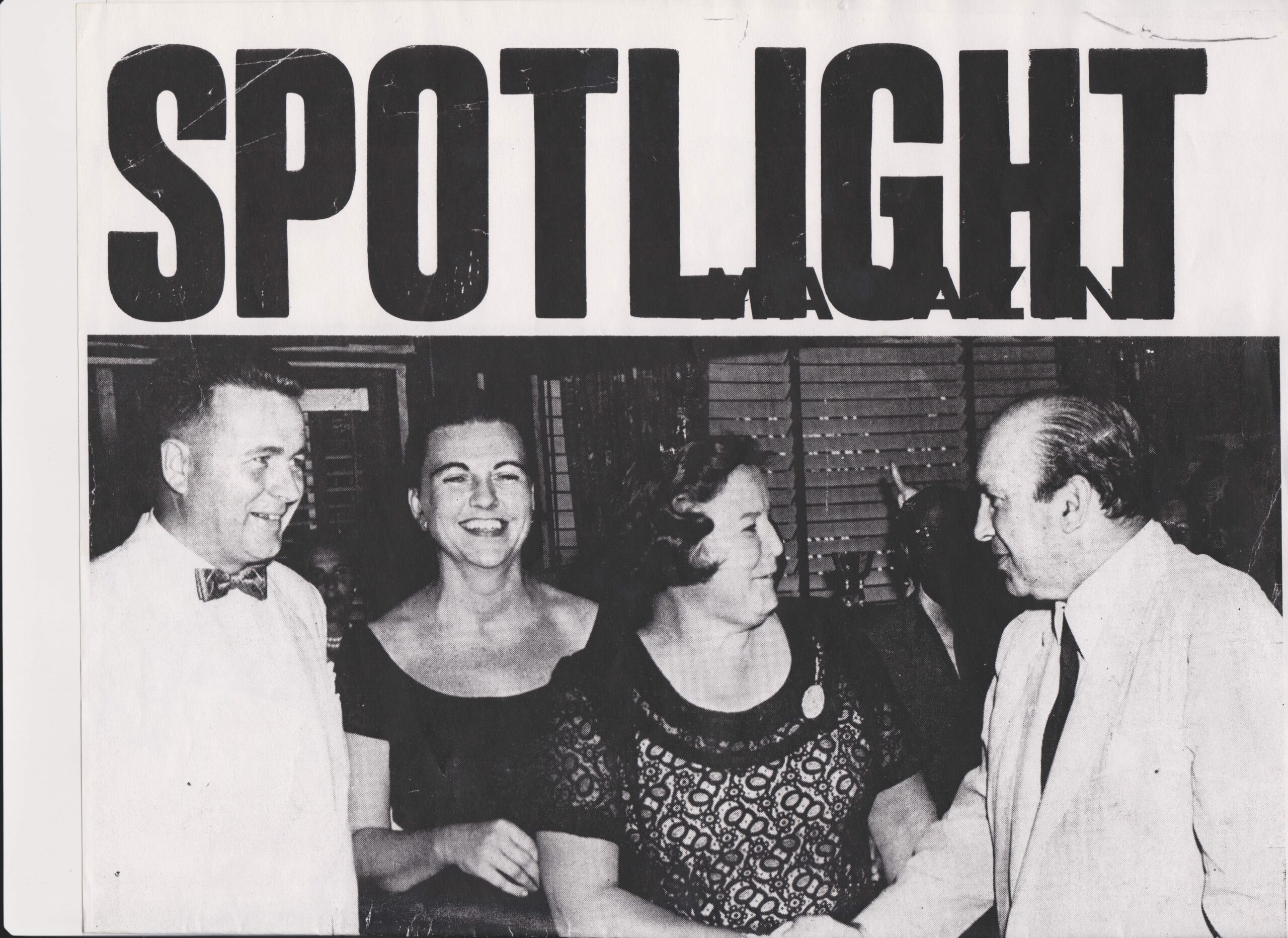 Gertrude Ederle, the first woman to swim the English Channel in 1926, was feted at Bahrs Restaurant on August 4th 1956. Trudy spent her summers in Highlands where she trained in the challenging currents beneath the Highlands bridge. She swam 35 miles from Cape Griz Nez, France, to the south coast of England in 14 hours and 31 minutes. The event celebrated the 30th Anniversary of the Channel Swim and was covered in the society magazine Spotlight and in the local papers.The menu for the event featured Baked Mixed Seafood in Clam Shell and Bisque Tortoni for dessert. The 30th celebration committee presented a gold chain bracelet inscribed “To Trudy 1926-1956”. Before the celebration ended Mrs. Ederle said “I will always cherish the beautiful memory of tonight”.

More Spotlight Photos of the Event

Below is the text from an article about the event in the Red Bank Register Aug. 9th 1956
Gertrude Ederle Honored
By
200 at
Dinner Tuesday
HIGHLANDS — “We’re all so
proud, of her.”
That statement best described
the feeling of the more than 200
persons who attended the Ger-
trude Ederle 30th anniversary
celebration Tuesday night at
Bahrs’
restaurant here.
Miss Ederle is the home-town
girl who made good by becoming
tho first woman ever to swim the
English channel. She made the
crossing Aug. 6, 1926.
The celebration committee pre-
sented a bond and gold charm
bracelet to Miss Ederle. The
bracelet was inscribed, “To Trudy,
1926-1956.”
Highlands Mayor Cornelius J.
Guiney Jr., originated the Idea
for the banquet.
•The Greatest’
‘I was trying to think of some-
thing we could do to help High-
lands and remembered that this
was the 30th anniversary of Miss
Ederle’s channel
s\\m,”
he said,
adding, “She’s the greatest thing
that ever happened to Highlands.”
The crowd which attended the
celebration watched movies of
Miss Ederle’s victory over the
channel. She swam 35 miles from
Cape Griz Nez, Prance, to the
south coast of England in 14
hours and 31 minutes, faster than
anyone had ever made the cross-
Ing before.’
Movies of ‘the triumphant wel-
come given her on her return to
New York and Highlands also
were shown. Many of her friends
who helped to make the flr3t cele-
bration “Highlands greatest day”
were on hand to congratulate Miss
Ederle Tuesday night.
Mayor Wagner Wires
.
Mayor Guiney road telegrams
for Miss Ederle which were re-
ceived from many friends.
“New York city will never for-
gel that wonderful day,” said a
telegram from Mayor Robert P.
Wagner.
A telegram from New York
columnist Westbrook Pegler said:
“You are still the greatest athlete
of our time.”
A letter from Kathleen M.
Graham, acting consul general of
Great Britain also praised Miss
Ederlo.
“Your feat should long bo
remembered as a sign of your
great courage and powers of en-
durance,” the letter said.
The movies of the 1026 celebra-
tion and the speakers brought
back many memories to the peo-
ple.
William Lee told the gather-
ing that at the 1926 welcome, all
the signs with the word celebra-
tion in them were spelled incor-
rectly.
Among guests Introduced were
Miss Ederle’s sisters, Mrs. Mar-
garet Deuschle and Mrs. Helen
Hutchlnson and her husband; her
two brothers, Henry and George
Ederle and their wives; Mr. and
Mrs.
Henry Zwipf of the Twin
Lights clbb; Mr. and Mrs. Jack
Jennings of the Women’s Swim-
ming association, and two nieces,
Trudy Morrison and Joan Hutch-
inson.
Annual Ederle Award
Outside the dining room was a
glittering display of the many
medals and trophies which Miss
Ederle won. Tho’ largest trophy,
the William Randolph Hearst
trophy, was given to Miss Edorle
when she was voted the “most
popular personage of her time”
in a nationwide poll.
Mayor Guiney announced that
an annual Gertrude Ederle award
will be started at Banner lodge,
Moodus, Conn., Aug. 20.
“We are all very pleased that
now there will be a yearly recog-
nition of your great contribution
to American sportsmanship,” the
mayor told Miss Ederle.
‘
The crowd heard one of the
original records of the “Trudy
Trot,” especially written for Miss
Ederle and played by Paul White-
man In honor of her historic
achievement.
Before the celebration ended,
Miss Ederle told tho gathering:
“I will,always cherish the beauti-
ful memory of tonight.’
Other members of tho celebra-
tion committee were John A.
Bahrs,
John J. Flemm, Mrs. Est-
her Bolster, former Mayor Frank
J. Hall, Timothy Lynch, Mrs.
Dorothy Johnson and Joseph Bol-
ger.
Share this post:
Call Now Button